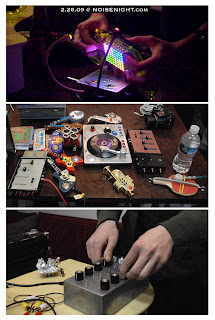 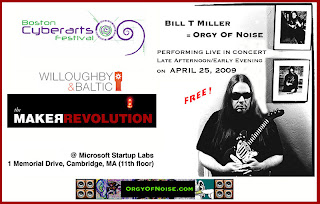 I will be playing a free LIVE ORGY OF NOISE SOLO SET SOMETIME LATE SATURDAY AFTERNOON or EARLY EVENING? Originally when booked and planned in back in February my fifteen minute set was scheduled to be early afternoon around 2:45pm, but after all the recent curating and committee meetings and think tanking and updating by the gallery staff things have expanded and bounced around so much that as of now a few weeks before the event, the timetable for my involvement in the event is back up in the air and it is not clear when i will be performing. I plan to there with some of my toys and gizmos ready to make some noise when needed. I will might be small part of a panel talk workshop late Saturday afternoon as well. At this point just playing it by ear. 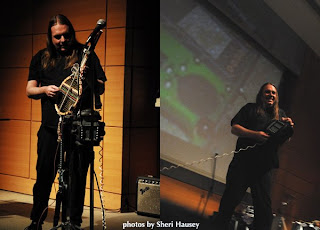 What I am doing is a very small part of the whole event. In addition to myself and Jimmie P. Rodgers (who hosts NOISE NIGHT Jam and Bent Workshops at Willoughby and Baltic) and Derek Hoffend, some of the other participants include David Nunez, Darius Kazemi, Doug Moore, Mary Murray, Andrew Sempere, and gallery founder and artist, Meredith Garniss. There will be events, panel talks, workshops, etc BOTH DAYS - April 25-26.

This two day CyberArts Fest excursion will be in Cambridge at this superb space that Microsoft Startup Labs has generously shared with the community, but the actual Willoughby & Baltic proper is in Davis Square, Somerville and hosts an amazing combination of gallery, workshop, performance spaces and is home to the Boston Dorkbot group.

* NOTE: This event is ALL AGES - bring the whole family. 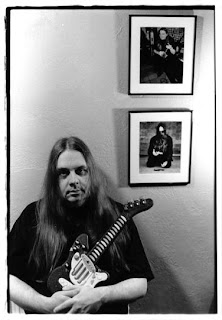 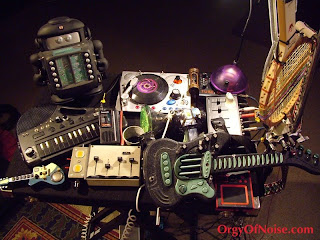 RSVP THIS EVENT on LAST.FM 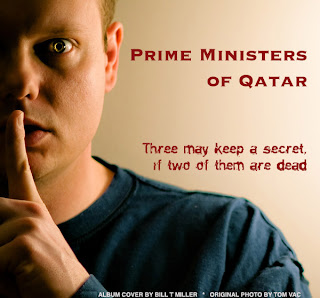 PRIME MINISTERS OF QATAR compositions are quiet and ethereal in the stylings of the "library drone noise" genre. Undisputed pioneers lost in a sea of clones.

Each side of the "Three may keep a secret, if two of them are dead" album is one complete composition full of secret coding steeped in death and irony. Often quoting the prophet and original circuit bender (via key, kite, & lightning) Benjamin Franklin and translating his words into Latin. This long out-of-print vinyl-only release was a limited edition pressing of 99 hand-number copies on the German label Emmerich Musikarchiv (1982). Originally conceived and captured via analog tape machines and vintage tube equipment during sessions in Berlin and London from 1979-1981 as the post punk new wave and disco dance trends sputtered on. When the core band reunited at the Festival de Artiste in Berlin in 2002 to perform the entire work they had the analog masters transferred to digital bits by old friend and collaborator Sir Holger, embracing the mac laptop trackball as a conduit to their soul.

The ensemble performed their past entire album at that 2002 reunion concert in the darkened gallery glow of laptop screens with humanoid whispers of Latin texts via contact microphones. They never engaged the audience or smiled, attesting to the weight of their pieces as sonic art sculptures and focused on moving the trackball mouse in their computer vessel. The live sound system was a trio of speaker arrays in the patented TRI-FONIC configuration. Once seated the audience was blind-folded and black duct tape was placed over their mouth to enhance the alchemy.

The maestro and principal of the group Dr. Guilliam T Mueller is shrouded in mystery. He rarely leaves his recording studio except to get treats for his kitties (who are part of the studio recordings.) PMQ has been cited as a major influence by the likes of Johnny Cage, Liberace, Jandek, up and coming trumpeter/plumber Gregory Kelley, and even the famed contra bassist William Murderface. Blixa Bargeld proclaimed the early PMQ 80s concert he witnessed was responsible for guiding him to new sonic realms in his formative years.

Dr. Mueller, who is now in is fifties is currently working on his memoirs which will be published on handwritten parchment scrolls. A documentary film is being edited from archival Super 8 black and white footage and a trunk full of old photographs. There is colour digital footage of the 2002 reunion concert and short backstage interviews with Dr GTM and some of the members of the cult. Search the net for preview trailers and recent GTM studio collaboration side projects.

To HEAR earlier related studio side projects, LISTEN TO THIS or THIS.

Although I have heard some of the pre and post collaborative releases, as far as I know there was only one official PMQ release studio release. Recently some audience shot clips of the 2002 reunion show popped up and then disappeared on YouTube. Unreleased studio mixes and other live concert bootlegs are rumored to exist. If you have a copy of the PMQ vinyl, please let me know. I heard it once under blotter haze in 1982 when a friend and collaborator of mine (poet Verno Tarte') scored it on trade with his pal from Munich. I remember being blown away and confused and focused to the point that I was never the same again.

Mueller's Father is a respected scientist and ecologist who played clarinet and ukulele and his mum is a artist, filmmaker, photographer, so it is clear where the early influence roots sprouted from. Guilly started playing toy piano at the age of two and by nine was a simulated prodigy savant playing tennis racquet and kitchen junk percussion at the pace of a young Edgard Varese possessed by the Road Runner. A steady diet of 60s cartoon and sci-fi movie music and a insatiable sugar addiction kept him in a zombie-like craze, eventually imploding the fragile balance of reality and helped inspire the 1982 PMQ masterpiece.

Tired of waiting for others to catch up and appreciate the genius of his sonic talents, he changed channels and mushed up a smorgasbord of other art exploring the "three Ps" - photography, painting, poetry.

The last official public sighting of GTM was the 2002 PMQ concert. Recently there are tales of GTM secluded in his Mum's basement holding seances trying to reach Joe Meek and Syd Barrett. Collaborations and remixes via internet audio exchanges have surfaced, but are still unconfirmed as to their authenticity. Others tell stories of semi-retirement with him writing jingles for Japanese products (sugary breakfast treats and kid's toys) for piles of cash and living the playboy lifestyle in a penthouse full of gadgets and excess. The myth and legend makes it clear that the real truth will always be elusive.

ALL HAIL the LEGENDARY PMQ and GTM. 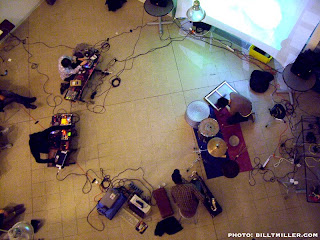 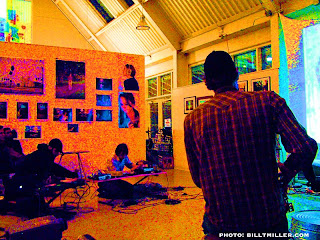 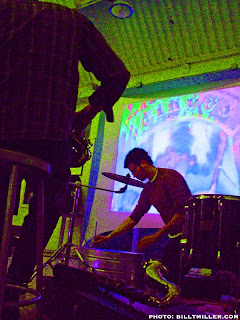 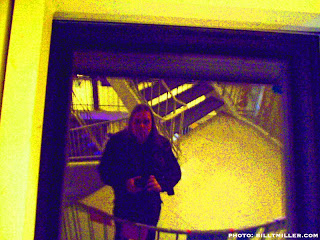 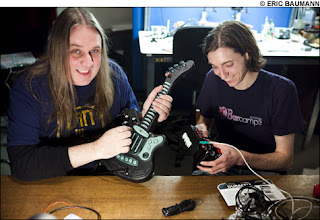 Bill T Miller (hey that's me on my Thom Uliasz Bent Guttar)
& Jimmie P. Rodgers (the host on his Bent GooseBumps Gizmo) jamming out at Noise Night on 2.12.08 at Willoughby and Baltic.

Boston Phoenix writer Richard Beck and photographer Eric Baumann (who snapped the above photo) made it out to witness the fun. READ THE ARTICLE HERE. (Look for a quote from "long-haired recording engineer Bill". HaHa.)

Also on joining in for the JAMS were regular participants, circuit benders Wayne Wylupski and Fred Owsley.

YOU ARE INVITED....
Circuit Bending / Electronics Workshop and Experimental Noise Jam
2nd and 4th Thursday of Each Month
@ Willoughby and Baltic,
197a Elm Street in Somerville, MA. 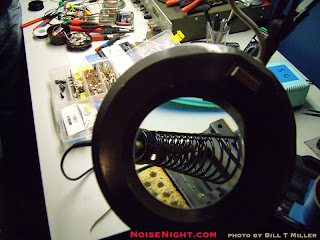 SEE a few more PHOTOS that I snapped in between jamming from
THIS 2.12.09 NOISE NIGHT & Previous 2008 Bent Workshops/Jam Outs. 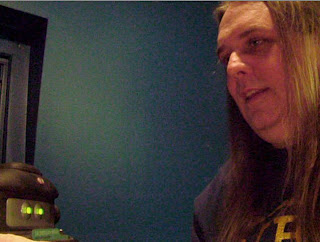 ME and MY ROBOT jamming out at Noise Night...
(the image is a frame grab from a video I shot.) 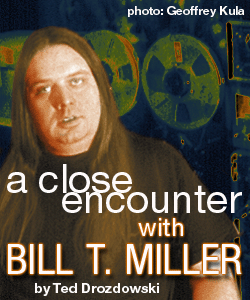 That Phoenix article reminds me about a decade old BTM feature article from April 1999 by Ted Drozdowski with photo (above) by Geffrey Kula. Man, time flies. Seems like yesterday.
Posted by Bill T Miller (BTM) at 2:24 AM No comments: