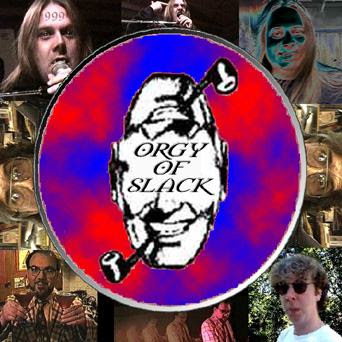 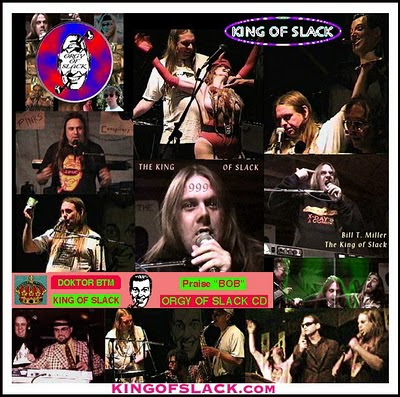 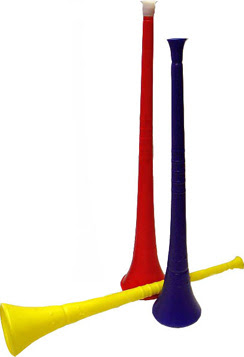 ...still need more vuvuzela? CLICK HERE - works for any URL.
Posted by Bill T Miller (BTM) at 4:04 AM No comments: 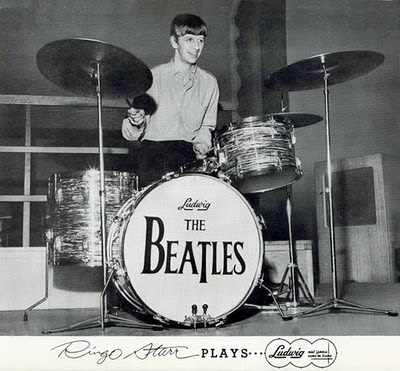 RINGO is my favorite MOCKER. Plus he is the DRUMMER for the first record I ever scored (I Want To Hold Your Hand 45) when I was young lad back in 1964. I tried in vain to get my Dad to take me to Shea Stadium in NYC to see The Beatles in 1966. I finally saw Ringo when he popped up for the encore at The Band's Last Waltz concert at Winterland in San Francisco - Thanksgiving 1976. 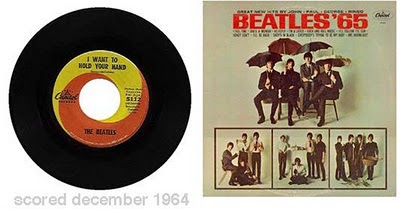 Fans can expect to hear a jukebox worth of classics including Ringo’s “It Don’t Come Easy”, “Photograph”, “Little Help From My Friends”, “Yellow Submarine,” “Octopus’s Garden” as well as selections from his latest release Y NOT (Hip-O/Ume). Ringo will alternate with hits from the All Starr’s including: “Free Ride,” “Frankenstein,” “Broken Wings,” “Kyrie,” “Hang on Sloopy,” “Rock and Roll, Hoochie Koo,” “Dreamweaver,” “Talking In Your Sleep,” and “What I Like About You.”

Over the years I have seen some of his bandmates... Edgar Winter (and Johnny), Rich Derringer, The Romantics, Gary Wright (Dreamweaver tour with Peter Frampton & Fleetwood Mac.) 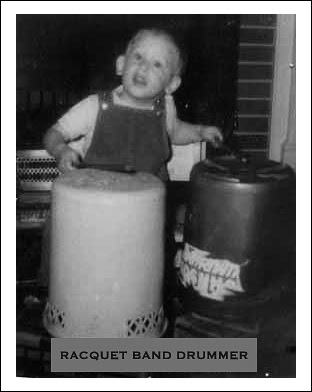 This was my first drum kit. I put it together 1966 and banged in a my RACQUET BAND until 1968 when I got a real snare drum (Rogers red sparkles) and put together THE ELECTRIC ONION. Although I played played drums on the side in both bands, i tended to adopt a morph of the John Paul George role and had my brother Greg on drums (pictured above in Racquet Band) and later in The Electric Onion he was special guest on guitar/vocals, so I had Clifton (below) on drums. 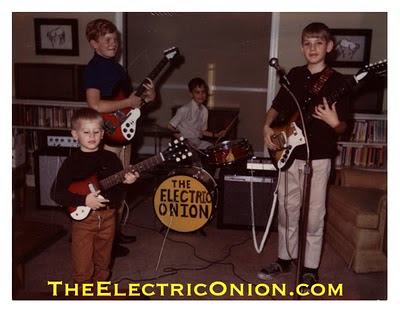 Although RINGO is my first favorite drummer, my earliest actually drum lust was when I heard Joe Morello's drum solo on The Dave Brubeck Quartet album Time Out in early 60s. Then in 1990, I formed DRUM ARMY, where I get to play tons of drums with some of the best players around. 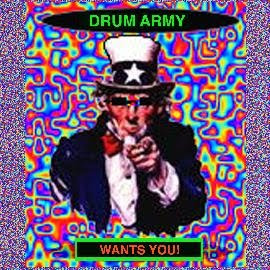 Check out this DRUMS! More Drums & Percussion YouTube Playlist that I put together. Are there any other must see drum videos that I should add to my playlist?
Posted by Bill T Miller (BTM) at 1:49 AM No comments: 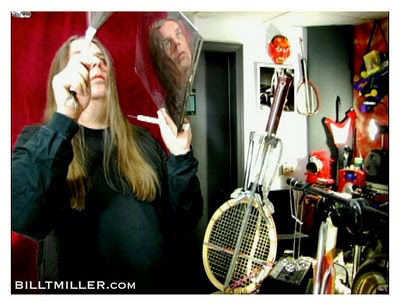 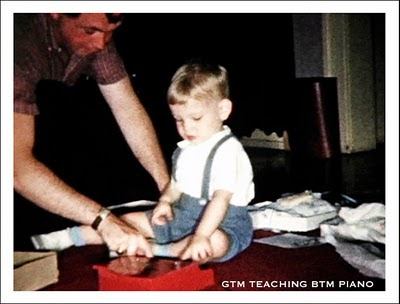 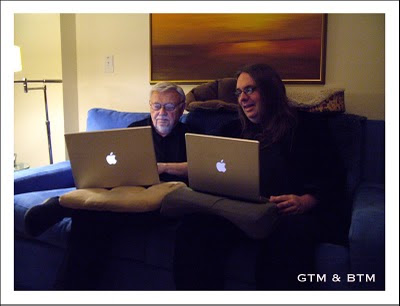 Me and Buzz Lightyear ! 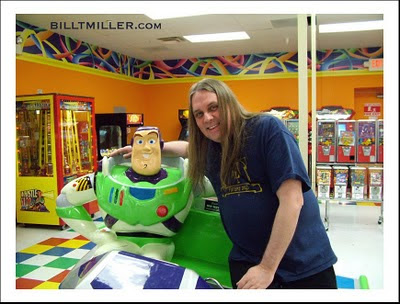 KingOfSlack.com
Posted by Bill T Miller (BTM) at 4:15 AM No comments:

= NON-STOP FUN = Triple Play Gemini Friday Adventures... AND AND AND ! 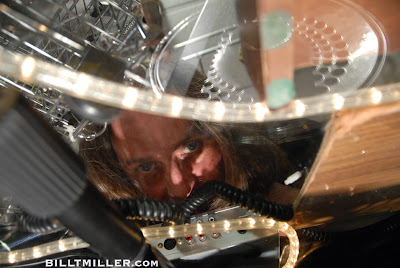 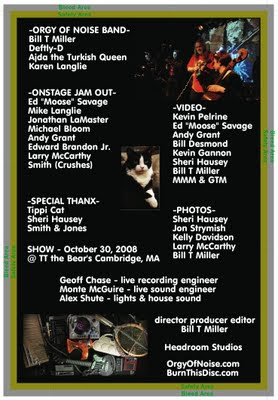 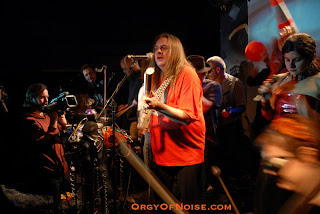 So anyway, over the last year or so, except for a couple Mission Of Burma gigs and a Robyn Hitchcock (solo) Jonathan Demme (workshop) Neil Young (concert film debut) at the Coolidge and a trip to the MIT FLEA I haven't been out of the studio that much.

AND yeah, so JUNE.... this past FRIDAY (June 4th) all of a sudden there FOUR different happenings in one night. All by people who I am friends/collaborators/fans of and that I am very loyal to. They have shown their loyalty to me by being for me as well. Too much to choose from... Karen Langlie (Wisteriax) was playing her CELLO way up in Lowell and Jason (of Neptune) having a birthday party in Cambridge, guitarist Cathy Capozzi (Axemunkee) playing her own birthday bash show (also in Cambridge) and Deftly-D and crew were putting on a multimedia show called ORDNANCE in Everett. So with a bit of planning it timed out that I could catch 3 of the 4 by doing an hour or two at each. Crazy, but doable. 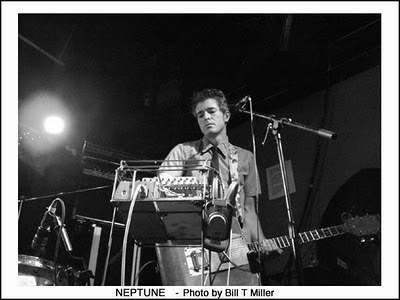 see NEPTUNE pix & video here !
JASON SANFORD, the mastermind of the band NEPTUNE turned the big 4-O on June 4th. The backyard BBQ was great fun. I knew I was at the right spot when I saw the front yard of house had a heap of bicycles. Neptune is tip top of my list of my favorite experimental rock bands of all time. I first saw them back in 1998 when my Orgy Of Noise & Kings Of Feedback bands appeared the UNDERBELLY CD and they played the CD compilation release show. Somewhat recently Neptune member Dan Boucher moved away to Arizona and they had to get TWO people to replace his awesomeness. They actually grabbed their longtime engineer/co-producer Kevin Micka and the band's close pal Farhad Ebrahimi, who were already part of the Neptune family. They all have been building new instruments and electronics and getting ready for their return show debut of the new line-up at Great Scott club here in Allston this August. Since seeing them in 1998, I have shot tons of photos/videos of NEPTUNE and at some point I MIGHT even do a BTM REMIX of NEPTUNE... if they ever get me the master audio trax.

Hung out for the first part of Jason's birthday party (from 7:30pm - 9:45pm - but didn't snap any photos) and then off to AXEMUNKEE who were playing a nearby club... 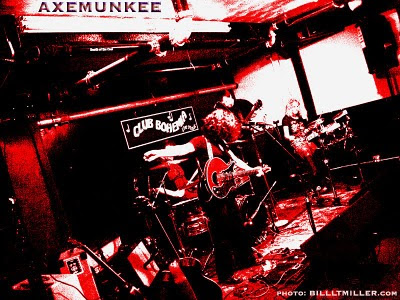 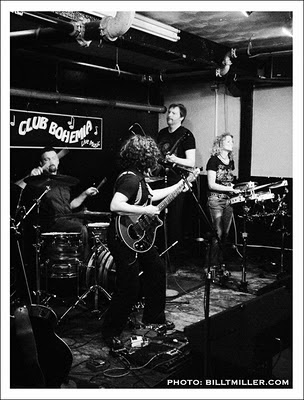 Bounced in and out just for Axemunkee's set (from 10:15pm -11.15pm) and the headed out to ORDNANCE III gig, which was at a new spot in Everett. Bit of zig-zaging and made it there just before midnight to catch the finale sets and hang with the crew. 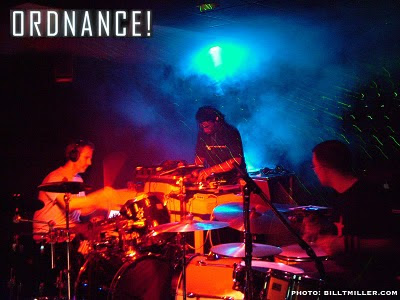 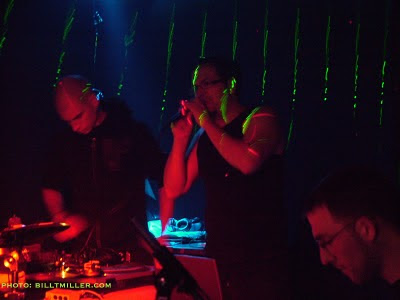 SO just like clockwork, somehow managed to experience ALL THREE HAPPENINGS and SURVIVE.

* AND AND AND... now on JUNE 8th Robyn Hitchcock is returning to the Coolidge Theatre for a full solo set.

*UPDATE: Back from the ROBYN show... he spilled his gray matter with his usual eccentric charm and wit whilst plucking away masterfully on his strings of steel resnonating over wood. At first glance his lyrical riddles appear to be delusional stream of sub-conscious babble, but somehow I was able to connect the dots and find the punch line and the melodies. Bravo.

Later this week, I am thinking of making it out to the MIT FLEA on JUNE 20th and then definitely going to RINGO IN CONCERT on JUNE 29th.... but for me and my normal pace, I am actually still taking it a bit slow on outside of the studio fun for the month of JUNE, relatively speaking anyway.
Posted by Bill T Miller (BTM) at 11:30 PM No comments: